Considered an epitome of opulence, high-end designer handbags have given great luxury to the consumers. That luxury is pretty much impossible to replicate unless the manufacturers are Louis Vuitton, Coach, Hermes, Dior, Chanel, and many others themselves. But every industry is infected with fraudulent retailers, trying to sell out apparently identical copies of original products.

They usually lurk around the secondary market, where it is relatively easy to pass fake designer bags. You may not be able to tell at the first glance, especially if the replica is convincing. Not just the brick and mortar shops, but also countless digital platforms are relying on such malpractice.

Now, the question of how can you tell the fake from the original products? Simply, by watching out for some prominent signs that we have mentioned below in this article. So, let’s find out how to identify fake designer bags.

How to Spot A Fake Designer Bag?

That is where you can easily differentiate the fake products, but it isn’t easy to pull off the company’s exact logo. Brands usually use logo plates that are consistent in quality, shape, and color. Or, even if they are printed, the results are always crispy and up-to-the-mark. Whereas fake designer bags may have inaccuracies, blurriness, and inconsistency that give them away.

For instance, Louis Vuitton’s signature logo comes with gold-colored plates, an angled design, and a shiny appearance. Some also exhibit a chained design that elegantly connects with the designer bag. Something with much detail would be hard to replace, allowing you to judge effortless which one’s the red flag. 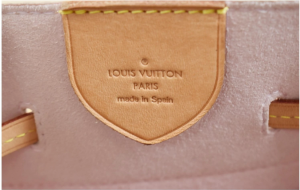 Another prevent a mistake that you might encounter is misspelling — Hermes turns into Hermis, Dior becomes Deor, and so on. Not to forget, some brands also put up logos inside the bags for a more authentic experience. And you may not find this detail in copied products.

Whether you have bought from the world’s top brands or some less popular but authentic ones, they all have a strict criterion for standards. As for Louis Vuitton, every product they manufacture passes through various tests before it is launched. The tests may go on for even months, eliminating the chances of any defective products releasing into the market.

Therefore, when you are purchasing a designer bag, make sure everything is in the right place, with no defects. Secondhand products might exhibit signs of wear, but not birth-defects. It means manufacturing defects are not a thing for high-end designer bags. Don’t listen to the seller’s story, if he tries to put the fault on the manufacturers. That’s because he might be selling fake designer handbags.

Look into The Price

Is it ok to buy fake designer bags for a few hundred dollars? No, because it is impossible. A single bag from luxurious designer brands such as LV, Hermes, and Chanel costs thousands of bucks. And there is a valid reason for that. Each manufactured product is a work of art, ensuring high quality that you cannot find anywhere in the world. They utilize the finest raw material on this planet, combine it with quality craftsmanship, to manufacture the world’s best bags.

You would be astonished to find out that some of the Hermes’ designer bags range between $40,000 to $50,000. It is indeed a jaw-dropping price for something like a designer handbag.

So, if some seller is giving away designer handbags with a cheaper price tag, it is a huge red flag. Watch out as he might be selling fake luxury bags that aren’t worth your investment.

Don’t Forget to Check the Hardware

We don’t really pay attention to trivial things like zipper pulls, buttons, and clasps, which can be the reason why we get ripped off. Original brand hardware is built to last and doesn’t wear out easily. It wouldn’t be wrong to say just by considering the quality of this hardware, you can differentiate the fake designer bags.

Make sure the color is intact, the tags are not rusty, and everything is working properly. For instance, if the threads impede zipper movement, it isn’t an original product. Fake designer bags have all kinds of easily-identifiable hardware defects.

Then again, if you are purchasing from a secondary market, the chances are that the hardware has gone out of shape from heavy use. In that case, look for smaller detail like how the name is printed on the tags. Or, the material weight and quality used for these embellishments. This information would be enough to filter out the replica designer handbags from genuine material.

The Authenticity of The Leather

Pure leather costs a fortune. But to ensure that you are investing in the right material, you have to beware of the fake material. How do you identify leather forgery? Here’s how:

No matter how identical the counterfeit material looks, it can never replicate the signature smell of leather. By taking a whiff, make sure the material is giving out a distinct sharp smell and not a plasticky odor. However, for this to work, you should know how real leather smells like. So, practice first before heading to the market to spot fake designer bags’ counterfeit leather.

Look for a Label

Manufacturers usually throw some labels or identification logos in their leather material, ensuring authenticity and genuineness.

Look for such marks as the fake designer handbags often miss this detail. If the product lacks labels, it is safe to assume that you are dealing with fake designer bags in China.

Fake designer bags, most of the time, feel very smooth against the skin just like a synthetic material. While original material is somewhat coarser or even slightly smooth, but not as much as plastic. Also, the texture isn’t consistent in the original material, considering that it is kept natural.

Similarly, if the pore pattern is too consistent to be true, it is probably fake leather. That’s because natural leather does not showcase consistent patterns of pores, or texture. And it isn’t changed during the manufacturing process either.

Another important factor that sets apart the real ones from the fake designer bags. When dealing with the latter, you may find smooth, consistent, and fine edges, which isn’t a natural trait of leather. It simply means the product isn’t original.

Most of the time people associate discoloration with luxury knockoff handbags, but it isn’t quite accurate. External factors like temperature, dirt, impacts, dust, oil, and light rays trigger the depigmentation even in the finest leather products. As a result, the material loses its original color, turning into a dull-looking surface. Don’t be fooled by this as it is normal for original leather.

As mentioned earlier, nothing leaves the workshop if it isn’t up to the highest standards of the market. That’s how brands like LV and Hermes have conquered the industry with unprecedented quality. And the stitching area is where the bag or any product requires great craftsmanship and skills. Fake designer bags usually have worn out stitches with dangling nodes that just look odd. Oftentimes, the dangles also get stuck in the hardware like zippers, making them troublesome to move.  This is a clear indication that the products you are witnessing are cheap replica handbags.

Industry giants rely on smart engineering to identify the number of stitches in each handbag. For instance, some of the Hermes uses the equation of nine stitches for every inch. Not one stitch is out of order or placed unnecessarily. The same goes for Louis Vuitton products, having hundreds of stitches.

Research on the Serial Number

Another element that can easily identify cheap designer handbag knockoffs is the product’s serial number. It is a code, which is unique for every product a company sends out — call it a symbol of authenticity. Since it is troublesome to remove, attach, and replicate these codes, replica designer handbags suppliers often make mistakes. For example, they can miss a number, mess up the font, or even misprint something. 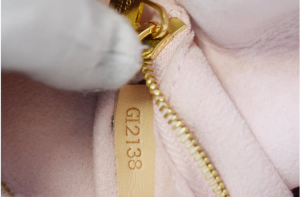 Moreover, each high-end brand has varying formats, making sure the serial number doesn’t match with any other product. The best example would be Chanel bags that come with a short 6-digit code, for products ranging from 1984 to 1986. And a 7-digit code, for products manufactured from 1987 to 2004. You may not be able to identify something like this right away, but only with proper research.

The technology has come so far that you can now differentiate high-quality designer replica handbags from the real ones using an application. This purse identifier app works alongside a camera that scans the material on a microscopic level. Then the sample is cross-checked with the data-hub having the brand detail. The close examination allows the computer to recognize fake designer bags.

However, it is a pretty costly investment. The device itself costs many hundred dollars, after that you have to buy monthly packages. For example, authenticating 30 bags in one month will charge 400 extra bucks. It may sound insane, especially for a regular customer. But the application was originally meant for businesses. Retailers from all around the globe have approached them for monthly authentication of hundreds of products.